How to convert WMV to AVI Free

Convert any WMV to AVI free with Freemake WMV to AVI Converter. It's the easiest solution for Windows PCs. Transcode WMV files to AVI without quality loss. Freemake works with ALL types of WMV files, HD or small clips.

Here is how to convert WMV to AVI free:

If you need to convert WMV to AVI, download free Freemake WMV to AVI Converter. This freeware will easily encode any WMV videos files to AVI without original quality loss. Click the green “Download” button to download a setup file. By default, you will get an online version of the installation file. It requires a stable Internet connection while the installation is in progress. If your connection is slow or has gaps, please use a full version of the setup file.

The software can be installed on Windows Vista, Windows 7, Windows 8, and Windows 10 desktops and laptops. Please note that Freemake tool doesn’t work on tablets.
2

Complete the installation process and wait till Freemake WMV to AVI Converter starts. It will happen automatically.

Now click “+Video” blue button to add your WMV files into the software. You can add many WMV videos at once. The free WMV to AVI Converter supports drag-n-drop option. Thus when you add a big number of files, you can use it to save your time. 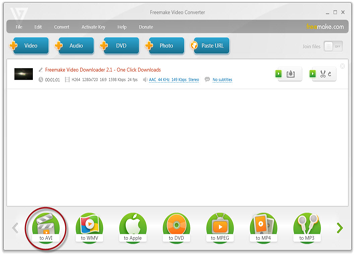 On the formats bar of Freemake WMV to AVI converting program, click the “to AVI” button.

In a new window with settings, select video quality (HD, medium, TV, DVD, etc.). If you can’t find a necessary ready profile, click the cog-wheel to add the desirable settings manually. You can set video and audio codec, bitrate, frame rate, resolution, and some other parameters. Click “OK” to close the preset editing window.

Please note that your original WMV videos won't be changed. The WMV to AVI converter will create new AVI files in a specified folder. By default, they will be saved in "My videos." You can change the path for your new AVI files in a line right above the "Convert" blue button.

Keep in mind that you should have enough of free space on your local drive to save WMV as AVI.

To run the conversion process and change WMV to AVI, click the “Convert” button and wait a bit.

If you’ve added many HD clips, it may take a little bit longer to convert from WMV to AVI. When the conversion finishes, go to the preselected folder and check your AVI clips with Windows Media player or any other tool.