Learn how to convert AVI to MP4 free:

If you have an AVI video file that you need to convert to MP4, you will need to download and install a special program that will help you convert AVI to MP4 in a couple of clicks. Freemake AVI to MP4 Converter is a perfect choice for this scope. It will do the job for you in the fastest way and with no quality loss.

Download the freeware from the official website (Free download orange button above). Please don’t download Freemake tool from any other online platforms. Only the official setup file will guarantee that the freeware is safe and won’t harm your computer.

Free Freemake AVI to MP4 Converter can be installed on Windows-based computers except for the tablets. The supported system versions are Windows Vista, Windows 7, Windows 8, and Windows 10.

By default, you get the online installation file which saves your time by loading all the necessary components on the go. If you need to install the program without being online, please ask the offline installer from our support team.
2

Run free AVI to MP4 Converter and add your AVI video files for conversion. There are three ways to do it. You can click File –> Add video and select the videos from a folder on your PC, USB stick or cloud drive. The 2nd way is to click the "+Video" blue button. And finally, if you have multiple AVI files for MP4 conversion, you can simply drag-n-drop them to the Freemake video software in batch.

You can convert any input AVI file: large (over 100Mb), medium, or small.

If you plan to join the files during the conversion, add them in the order you want them to be in the final MP4 video. 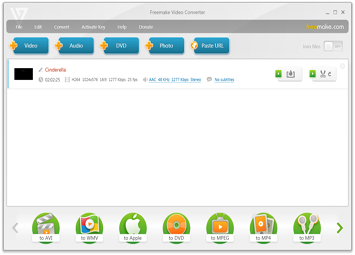 Now click "to MP4" option at the bottom of the free AVI to MP4 Converter software.

Freemake AVI to MP4 program allows users to add to "Favorites" the supported extensions that they use regularly. If MP4 is your everyday choice for the output multimedia container, click the star sign next to the "to MP4" button to mark it as "Favorite". You can create your personal formats bar out of the video and audio extensions to which you convert data most of all.

When you click the "to MP4" output format, there will appear a window where you can set the final MP4 clip parameters. First of all, choose the media quality that you need. If you want to keep everything "as is" without losing video quality after the conversion, select "Same as source" option. Keep in mind, that you have a video file in a non-HD resolution; you can’t select HD or Full HD quality.

Then you need to choose the video codec: MPEG-4 or h.264. Most ready presets go with the second option. However, if you need strictly MPEG-4 codec, you can change the parameters by creating your own MP4 profile. Use the cogwheel button to open the settings & change video resolution, frame rate, sample rate, bitrate, audio codec, and other settings. If necessary, limit the output video file size, and the software will automatically change & suit all the conversion parameters to that value.

In case you want to upload the ready MP4 movies onto your website & share online, mark the option to generate a ready code for your page at the end of the conversion.

One more option for the output video: you may add subtitles downloaded from the Internet. Find the respective option in the main freeware window.

Finally, select a folder for your MP4 clips. It’s not necessary to save files on a PC; you can choose your cloud drive folder or a USB flash drive as a destination path.

When everything is ready, click the "Convert" button and encode your AVI files to MP4 with the best quality. The conversion process may take some time depending on your PC capacity.

Optional! After your MP4 movies are ready, you can start watching them on a PC or transfer to a portable gadget. We recommend you to play the converted file in a standard media player on your computer. For example, Windows Media Player or VLC are ideal for most multimedia playback.