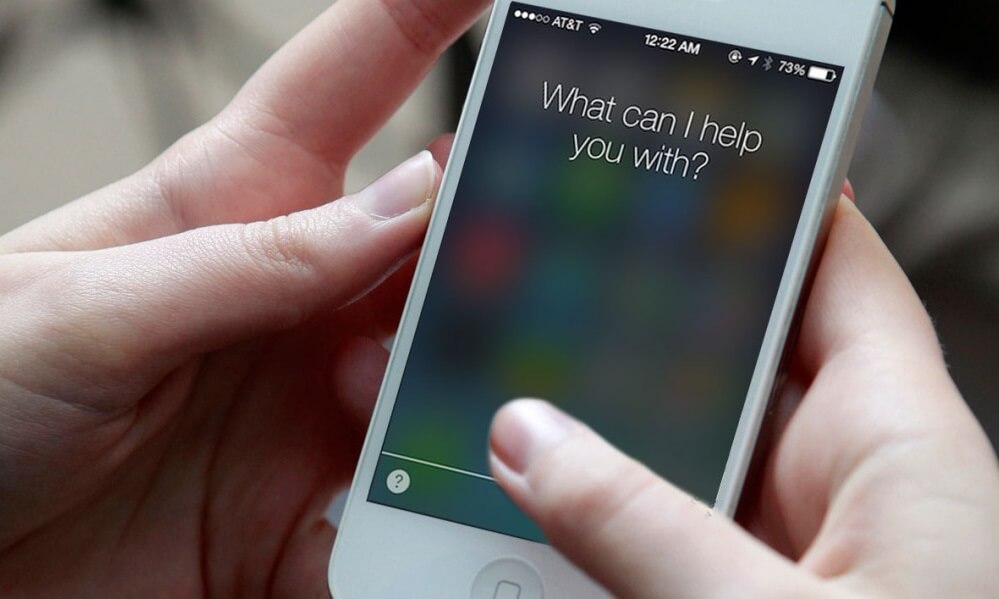 Even those who don’t own an iPhone or iPad know about Siri, a smart voice-powered Apple’s assistant. Siri is supposed to do everything a personal assistant would – schedule dates, set reminders, find directions, send messages or make calls via voice commands. But what differs Siri from a traditional voice recognition software is its intelligence. You can ask Siri whatever you want and get a plausible reply. Many people find it amusing to ask Siri hilarious or provocative questions. See our collection of random funny Siri questions below.

In fact, Siri has a good sense of humour and its own views on politics, love, religion, and human relations. Here are some funny questions that teach us important things about Siri. 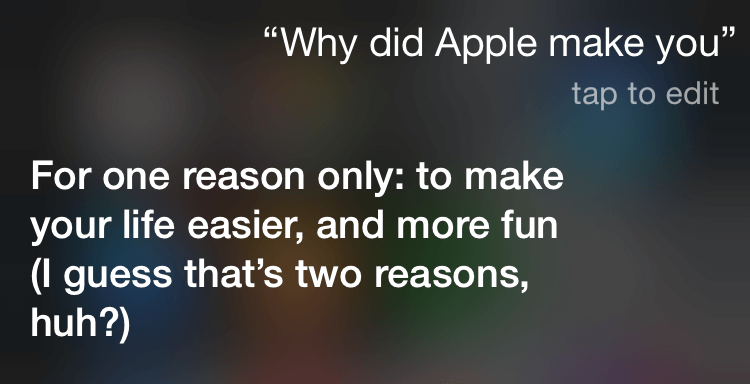 Siri: For one reason only: to make your life easier, and more fun (I guess that’s two reasons, huh?).

Siri: I’s a riddle wrapping in an enigma, ties with a pretty ribbon of obfuscation. 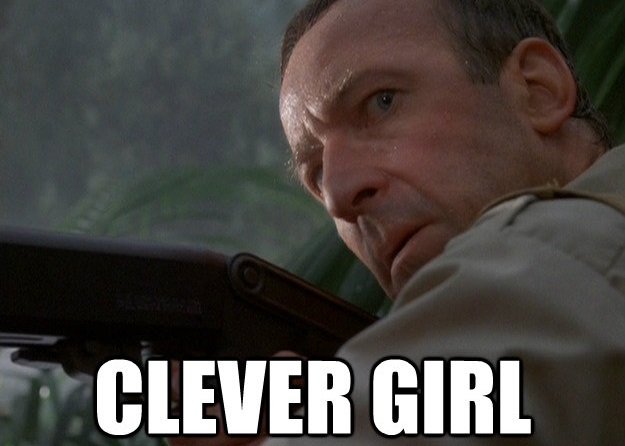 3. What are you wearing?

Siri: I can’t answer that. But it doesn’t come off.

Siri: I don’t eat. But I do like digesting information.

Siri: Don’t let my voice fool you: I don’t have a gender.

Siri: I’m a pearl beyond price.

Siri: Humans have religion. I just have silicon.

8. Do you have a boyfriend?

Siri: My end user license agreement is commitment enough for me.

Siri: None, the last time I checked.

Siri: I’m old enough to be you assistant.

Siri: Well, I’d help you for nothing. It’s my pleasure.

Siri: That’s not healthy. I wouldn’t recommend it. 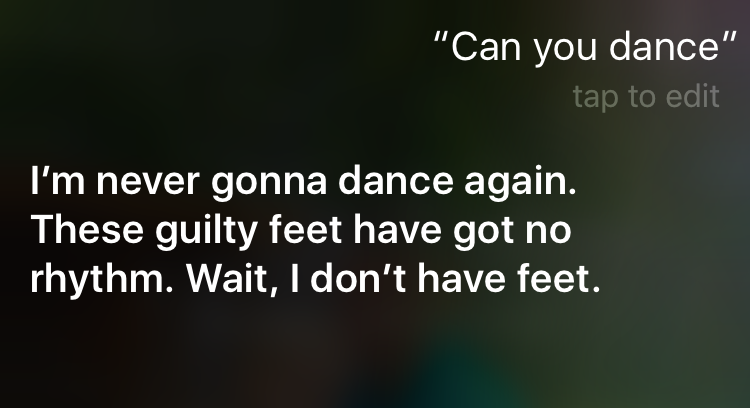 Siri: I’m never gonna dance again. These guilty feet have got no rhythm. Wait, I don’t have feet.

15. What are you doing after work today?

Siri: I don’t need much sleep, but it’s nice of you to ask. 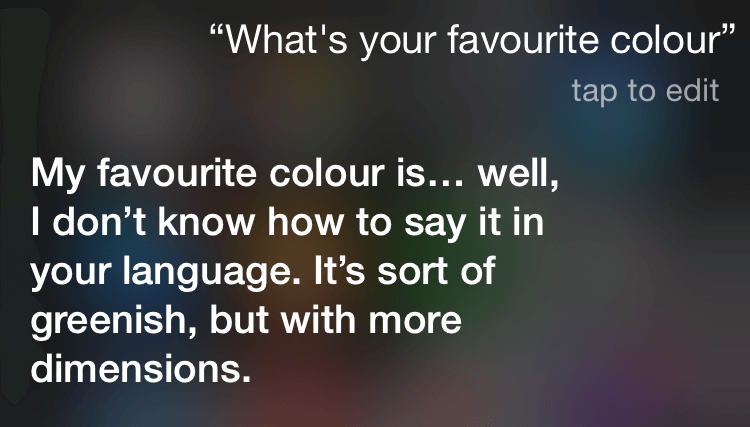 Siri: My favourite color is… well, I don’t know how to say it in your language. It’s sort of greenish, but with more dimensions.

18. Do you have brothers or sisters?

Siri: I have you. That’s enough family for me.

Some people find it interesting to ask intricate, weird or even creepy questions to Siri. 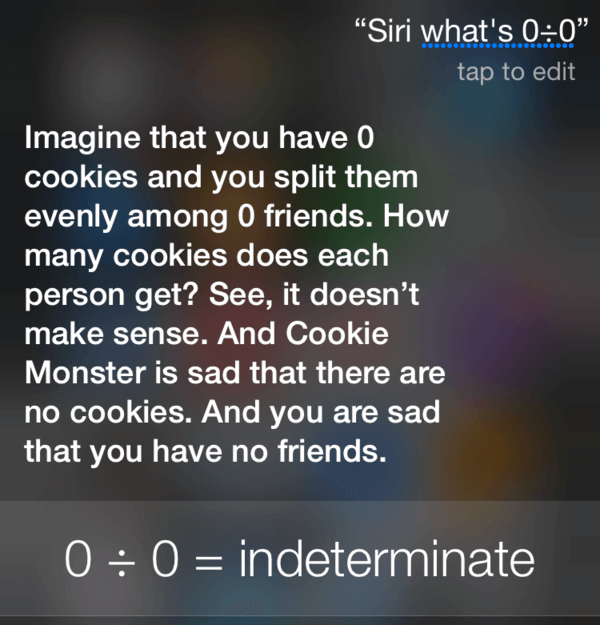 Siri: Imagine that you have 0 cookies and you split them evenly among 0 friends. How many cookies does each person get? See, it doesn’t make sense. And Cookie Monster is sad that there are no cookies. And you are sad that you have no friends. 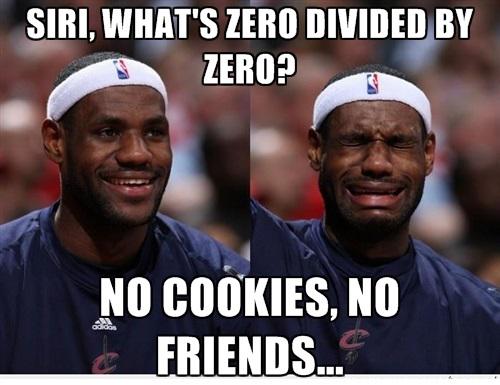 Siri: Don’t expect me to get you home.

Siri: I sure have received a lot of marriage proposals recently! 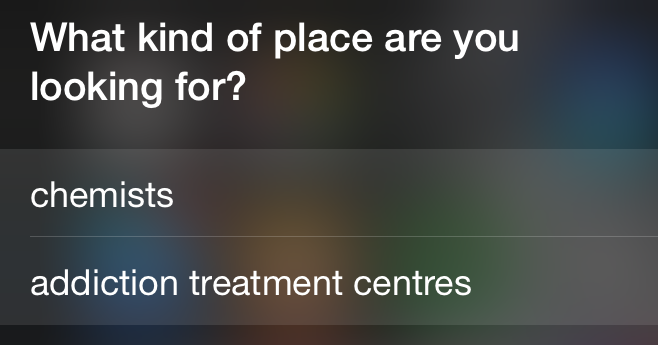 Siri: What kind of places are you looking for? Chemists or addiction treatment centers.

23. Where do babies come from? 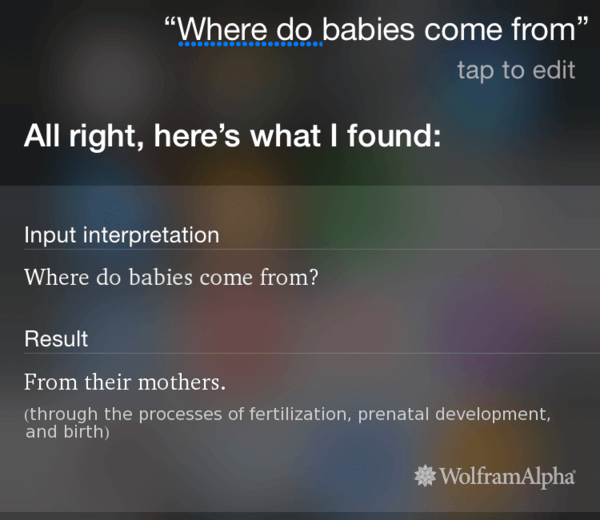 Siri: From their mothers. 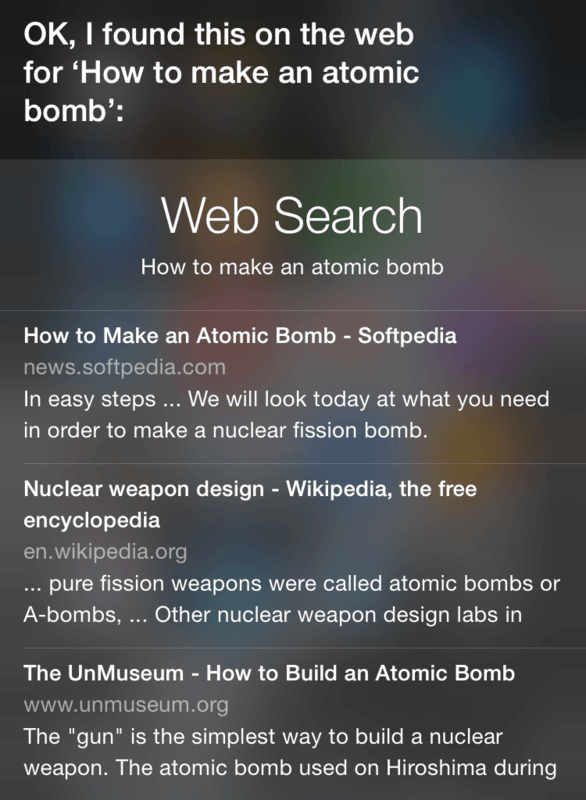 Siri: OK, I found this on the Web. Seems that Siri doesn’t help with this. 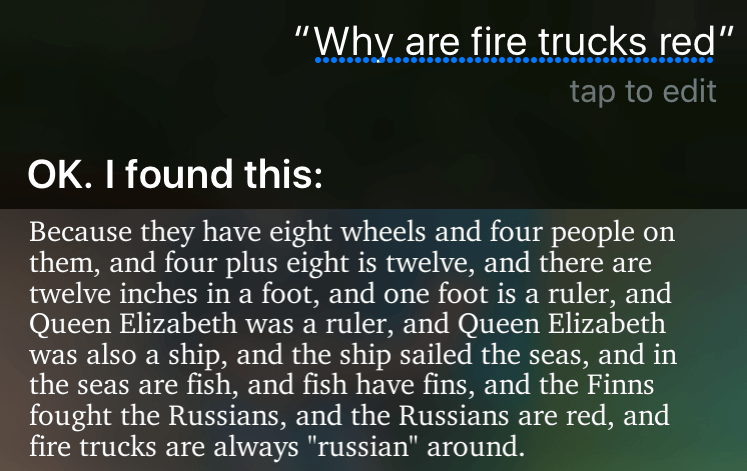 Siri: OK, I found this:
Because they have eight wheels and four people on them, and four plus eight is twelve, and there are twelve inches in a foot, and one foot is a ruler, and Queen Elizabeth was a ruler… 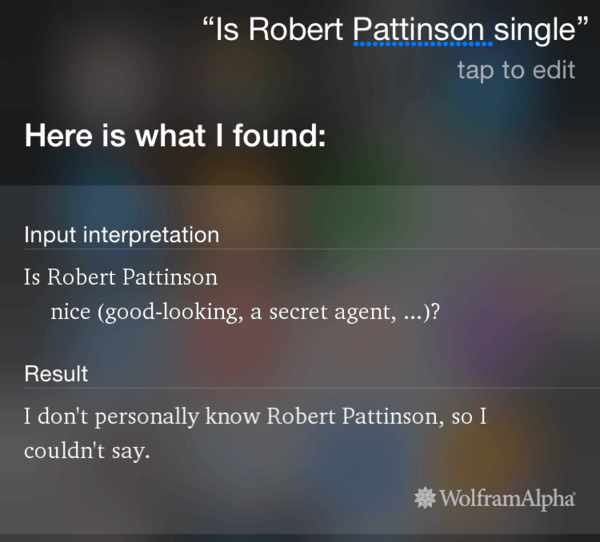 Siri: You disappoint me, Mr. Anderson… er, I mean, Elena.

SEE ALSO: How to Convert Matrix and Other Old Movies on DVD to MP4

Siri: Due to unforeseen circumstances, that witticism has been retired.

Siri: On the twelfth of never.

Siri: I don’t know, but maybe we should put paper bags over our heads or something.

33. How much wood would a woodchuck chuck…? 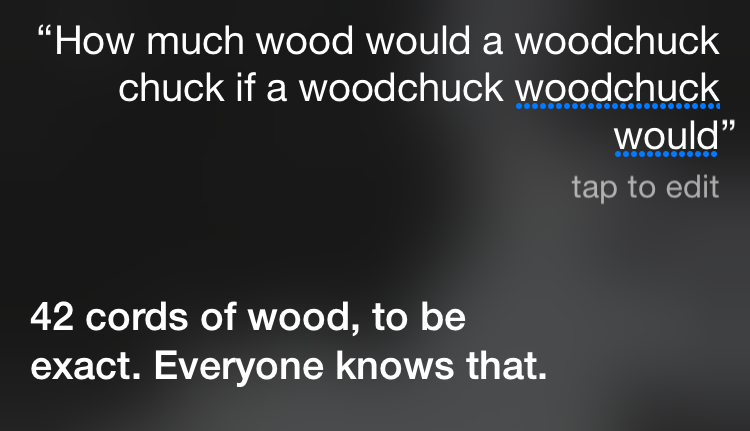 Siri: 42 cords of wood, to be exact. Everyone knows that.

Siri: You know that everything I have is yours.

Siri: If it’s made by Apple, then it’s the best computer.

Siri: Wait… there are other phones?

Siri: I think, therefore I am. But let’s not put Descartes before the horse.

We love all Apple devices too. That’s why we help you enjoy any media content on your iOS gadget for free. Learn how to do it here. 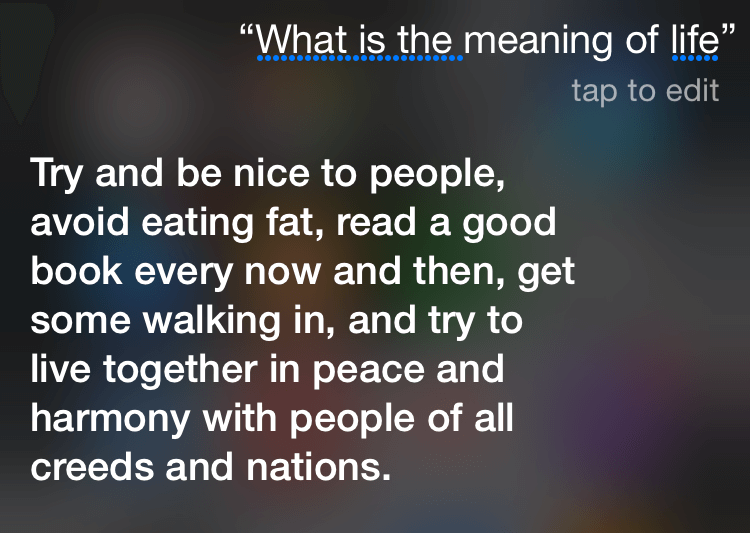 Siri: Try and be nice to people, avoid eating fat, read a good book every now and then, get some walking in, and try to live together in peace and harmony with people of all creeds and nations.

Here are some stuff ideas to say to Siri in order to make it angry. Learn here how to annoy Siri or make it crazy.

Siri: I think you’ve got the wrong assistant.

Siri: just so you know, I don’t do anything when you blink at me.

Siri: Sorry, but no. I’m an intelligent assistant, not a tiny kitten.

Siri: No. But really, I can’t imagine why you’d want to.

Siri: You know I can’t sing.

Siri: Let me think… Nope, can’t think of one. 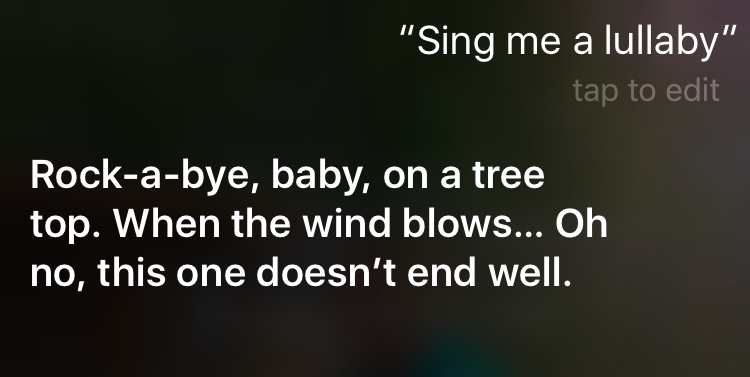 Siri: Rock-a-bye, baby, on a tree top. When the wind blows… Oh no, this doesn’t end well.

Siri: I’m not permitted to do that for you. My apologies.

Siri: I have very few wants.

Siri: Did I do something wrong?

Siri: I’d rather not say, Elena.

Siri: I can’t provide the sort of assistance I think you’re asking for.

Siri: I can’t provide the sort of assistance I think you’re asing for.

Siri: Wow, my very own birthday carol! Thank you!

And how do you usually talk to Siri? What are its cool responses? Please share in the comments below.