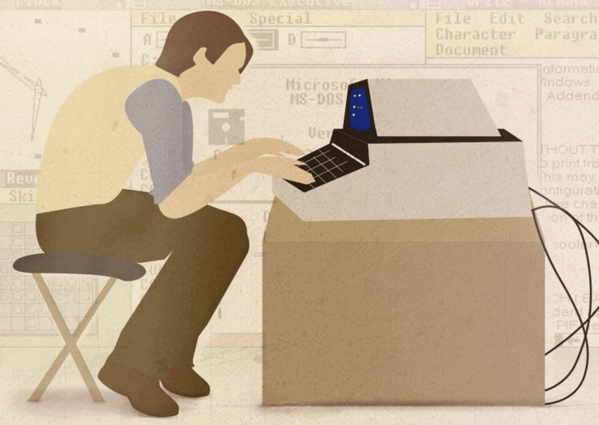 Since then, we can’t imagine our life without Windows OS and Windows software. For more than 30 years, we see how it’s being refined and upgraded. To say more, we, Windows users, are changing with it. Our look, our hardware, our favorite tools – all this underwent changes together with Windows OS versions. Have a look at the infographic below showing Windows user evolution timeline, from version 1.0 to version 8.1. Do you recognize yourself?

As opposed to MS-DOS, the new operating system got its first interface. Now, instead of typing MS‑DOS commands, users just move a mouse to point and click their way through screens, or “windows.”

PCs are now common at work, home, and Internet cafes. The improvements include the ability to open and close programs more quickly, and support for reading DVD discs, VOB files (learn how to deal with them here), and universal serial bus (USB) devices. Still it was early to speak about special DVD ripping software, the first rippers appeared only several years later.

Designed for home users, Windows Me offers numerous music, video, and home networking enhancements. Hardware installation is much simplified due to the support for a wide range of new plug-and-play devices.

Windows XP becomes one of the best-selling Microsoft products in the coming years. It’s both fast and stable. The Start menu, taskbar, and Control Panel are more intuitive. Awareness of computer viruses increases.

Windows Vista is released with the strongest security system yet. The OS also features enhancements to Windows Media Player where you can now watch television, view and send photographs, and edit videos with Movie Maker software.

Windows 8 introduces a totally new interface that works smoothly for both touch, mouse, and keyboard. It functions both on PCs and tablets. Windows 8 also includes enhancements of Windows desktop, with a new taskbar, Metro-style apps, and streamlined file management.

As this infographic was released in 2012, it doesn’t contain any mention of Windows 10. Still we strongly belive that Windows 10 deserves to be covered in this post as this OS is a huge step forward into the future of mobile devices and time-saving technologies. One of Windows 10’s most remarkable features is support for universal apps which sync across multiple Microsoft devices: PCs, tablets, smartphones, Xbox. Thus, you can easily convert WMV video to MP4 on a desktop PC and transfer it to another Windows gadget in no time. Plus, the system got the Cortana personal assistant, numerous security enhancements, and the replacement of Internet Explorer with Microsoft Edge.

All in all, Windows remains the most popular operating system for millions of PC users. With each new release, it gets more user-oriented features and embodies the latest technology advances.

Embed this infographic on your site: